Evening by the Bay: Jan. 27 (Tickets ONLINE ONLY) 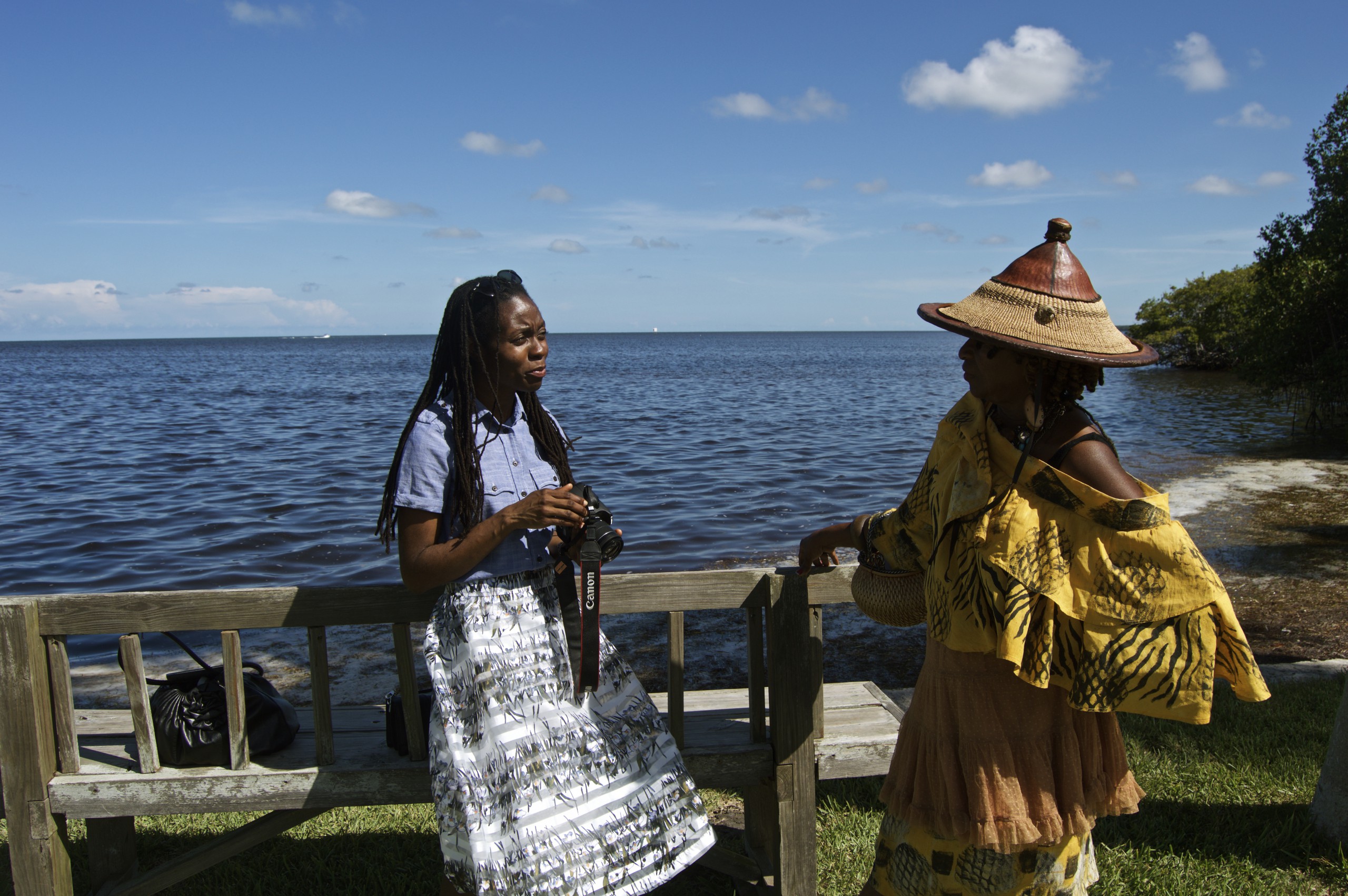 Join us on October 17th, 2020 for The Black Artist Talk, hosted by Artist-in-Residence, Michelle Grant-Murray. This virtual forum will focus on engaging Black artists, activists, and educators in discussions surrounding the decolonization of the artistic spaces. Panelists include: A’keitha Carey, Augusto Soledade, Melissa Cobblah-Guiterrez, Florencia Guerrier and Tiffany Merritt-Brown.

Michelle, Artistic Director of Olujimi Dance Theatre, has performed and presented work in Europe, Asia, South America, the United States and the Caribbean. She is currently on her 2nd term as an Artist in Resident for historic Deering Estate. Michelle is Associate Professor and Coordinator of Dance at Miami Dade College where she is the Artistic Director of Miami Dade College’s Jubilation Dance Ensemble. Michelle is the host and brains behind The Black Artist Talk, a conversation that dialogs the process, politics, and preservation of Black and Brown Artist in South Florida. Michelle is the Executive Director of the annual Artistry In Rhythm (A.I.R.) Dance Conference presented and sponsored by Miami Dade College. Michelle, author of Beyond the Surface: An Inclusive American Dance History, is writer, scholar, performer, choreographer, educator and mentor. She has developed and implemented Olujimi Dance Technique, a unique blend of contemporary and traditional modern dance styles infused with elements of African Diaspora Dance Movement forms, designed to chop at the core of physicality. ‘The aim of this process is to develop the physical, mental and intellectual body from a humanistic perspective; a perspective that values humanity, individuality, creativity and inventiveness.’ Additionally, Michelle has developed a unique choreographic process, Ancestral Dance Movement Memory (ADMM). ADMM explores movement that seeks to go beyond the collective memory of the present physical body and imagine the future utilizing the ecology of spirituality to reveal the essence of human nature. ADMM celebrates, heightens and authenticates the intuitive wisdom of the body. Michelle fuses sensuality, creativity, enthusiasm and zeal to live a life and create works that re-defines the corporeality of the body as a living, viable and moving portal. Michelle is committed to earth ethics, ecology and the sustainability. She serves on the Miami Dade College Earth Ethics Institute and is actively engaged in National Water Dance.

A’keitha Carey is a Bahamian Dance Educator, Performance Artist, Choreographer, and Scholar. She is currently a doctoral candidate at Texas Woman’s University and the originator of the fusion dance form CaribFunk. A’Keitha is a national and international educator; her scholarship addresses identity, womanism, Caribbean popular culture, sensuality, racism, oppression, female strength and agency. The “hip wine” (the circular rotation of the hip) serves as the conduit to achieve liberation and emancipation, imparting Afro-Caribbean sensibility in a Eurocentric structure (higher education) . Using the technique CaribFunk, she hopes to decolonize current dance curriculum in higher education.

Augusto Soledade a 2008 Guggenheim Fellow, is the Founder Artistic Director and resident choreographer for Augusto Soledade Brazzdance in Miami. In 2016, Mr. Soledade was awarded for the seventh time the Miami Dade Choreographer’s Fellowship from the Miami Dade Cultural Affairs. He received his M.F.A in Dance from SUNY Brockport in 1998. Also in 1998, he received the Pylyshenko-Strasser Graduate Dance Award and was the finalist in the dance category for the 1998 Thayer Fellowship. Augusto Soledade, a native of Bahia, Brazil, started his dance training at the Federal University of Bahia, Brazil in a program with strong modern dance emphasis and has trained with Garth Fagan, and Clyde Morgan. He also holds a degree in journalism from the Federal University of Bahia.

Melissa Cobblah-Guiterrez born in Cuba and raised in Ghana and Cape Verde, moved with her family to the United States of America where she has been currently living for the past seven years. Ms. Cobblah started her dance training at Miami Dade College Kendall Campus in 2015, from where she graduated with her Associate of Arts degree in 2017. She has studied under the direction of many recognized artists such as Michelle Grant-Murray, Nia Love, A’keitha Carey, Jawole Willa Jo Zollar, Kehinde Ishangi, Clarice Young, Anjali Austin and Charles Anderson. Her work “Spiritual Warfare” was selected to be presented at American College Dance Association in 2017. She worked as the rehearsal assistant of Millicent Johnnie in 2018, for the premiere of the Opera “Parable of the Sower” in NYC. Ms. Cobblah is a two times scholarship recipient of American Dance Festival for the summer of 2016 & 2018. She currently dances with Olujimi Dance Theatre and is attending Florida State University to earn a Bachelor of Fine Arts degree in dance. She is also working as the rehearsal assistant of Jawole Willa Jo Zollar for the restaging of “Shelter” at Florida State University.

Florencia Guerrier Originally from Miami, FL, Florencia Guerrier began her training with the Miami City Ballet School (MCB) after being awarded a scholarship at the age of seven. As a student at MCB she enjoyed dancing numerous of Balanchine ballets such as Serenade, Who Cares?, and The Nutcracker. She continued her training at the New World School of the Arts High School (NWSA), under the direction of Daniel Lewis. She has had the honor of working with Christopher Huggins, Michael Utoff, Uri Sands and Peter London during her time at NWSA. Her training extends to the Miami Conservatory of Ballet, Diva Arts Dance Company, and the Dance Theater of Harlem. She has performed professionally with the Adrienne Arsht center as a promotional dancer for the Donkey Show Musical, Mahogany Dance Theater and Icon Talent Agency. Mrs. Guerrier is a former company member with the Alma Dance Theater, the Live In

Color Dance Collective and artistic director for The Alpha Arts Project. Florencia Guerrier holds a Master of Education in Educational Leadership from Concordia University. As well as, a Bachelor’s of Fine Arts in Dance from Marygrove College in Detroit, Michigan.

Tiffany Merritt-Brown a native of Miami, Florida, holds a Bachelor of Fine Arts Degree in Dance from the University of Wisconsin-Madison. In 2013, she was awarded a full scholarship to complete her dance degree at UW-Madison after transferring from Miami Dade’s Honors College. While at Miami Dade, Tiffany danced under the direction of Michelle Grant-Murray.  Described by Isthmus Magazine as “a coolly elegant performer and choreographer that reveals keen intelligence and maturity” Tiffany has performed in works by Kate Corby, Marlene Skog, Chris Walker and Jin-Wen Yu at the UW. She has also worked with the professional dance company Urban Bush Women, as well as choreographers such as Heidi Latsky, Rob Kistos, Beth Gill, Joanna Kotze, Julie Mayo, T-Lang, Elizabeth Corbett, Nia Love. and Charles O. Anderson. Tiffany has presented her work at the American College Dance Association Conferences, informally at the American Dance Festival, the Detroit Dance City Festival, internationally at the WDA-A (World Dance Alliance-Americas Conference) in Puebla, Mexico and at Tanara Public School in Chepo, Panama. Tiffany’s choreography has been praised for its “clear vision, smart craftsmanship [and] fierce performance [it] is both structurally and choreographically satisfying.” Merritt-Brown is the recipient of the 2016 Virginia Horne Henry Fund for Women’s Physical Education, the Anna Nassif Award, and the Jin-Wen Yu Award. Recently, she was awarded the 2018 American Dance Festival Leadership Scholarship Award which is funded by the Adrienne Arsht Center and granted to a Miami-based dancer. In addition to being the Director of the Robert Morgan Dance Program, she is a company member with Olujimi Dance Theater, a freelance choreographer, and grant writer.