In celebrating the 100th anniversary of the Stone House’s construction in 2022, we highlight the estate’s status as a national landmark, and its place as an anchor, and source of pride for the State and South Florida community. We are fortunate to have continued support and collaboration with our philanthropic partners, the Deering Estate Foundation, and the 100 Ladies of Deering in preserving and interpreting this treasured heritage site. The custom built Mediterranean Revival Stone House home was designed for Charles and Marion Deering by Phineas Paist, best known for his extensive work in Coral Gables, and inspired by Charles’ majestic Spanish properties, Maricel and Tamarit.

The Stone House represents an architectural tapestry of the world travels, intellectual and philosophical interests and ideas of Charles Deering. In June of 1922, Deering entered into an agreement for the construction of the Stone House with Sandquist & Snow, Inc., the firm working under the direction of architect Phineas E. Paist. Charles likely became familiar with Paist in 1916, when he worked as an associate architect to Paul Chalfin in building the Villa Vizcaya, James Deering’s palatial residence in Florida. The construction of the Stone House took approximately 11 months to complete between 1922 and early 1923. An Otis elevator in the Stone House was one of the first private residence elevators to be installed in South Florida. The Stone House’s construction includes many recognizable architectural references of the popular Mediterranean Revival style (1917-1930s) established throughout the United States in the 1920s and 30s. Stylistic elements include stucco walls, red tile roofs, wrought iron grilles and railings, oolitic limestone, ceramic tile, arcaded walkways; and most notably, a carefully selected color palette: yellows, ochre, amber and tinted stucco reflecting tonalities warmed by the sun overtime.

The walls of the Stone House are 18-inch-thick reinforced concrete covered in a limestone veneer to imitate the rugged, exposed stone of Tamarit, a property Charles owned in Spain. Additional architectural elements of note include handmade Cuban barrel clay tiles, antique wrought iron window grilles, bronze and copper-clad doors and hand-carved columns with capitals depicting mainly botanical and animal motifs, as well as personalized family iconography. Throughout the year, the Deering Estate will be celebrating the 100-year anniversary of the Stone House with several events and programs. We will be inviting guests to speak about the significance of the Stone House and Mediterranean Revival Style and our ongoing historic preservation efforts.

Check out this video highlighting the Stone House Centennial.

We are excited to have new retail merchandise & specialty items that feature the Stone House Centennial!

A variety of items, including t-shirts, pins, patches, pencil/cosmetic bags, tumbler cups, ornaments & car magnets are for sale and available for purchase. During your next visit, stop by the Visitor’s Center office to purchase these great items! 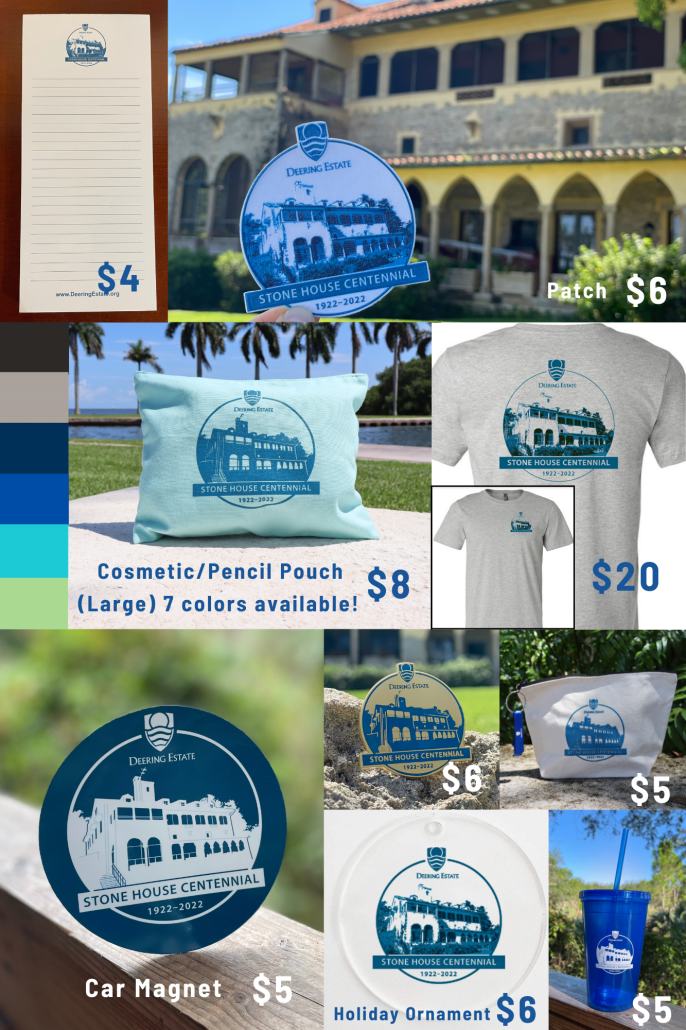 In honor of the Stone House Centennial and to support preservation projects at Deering Estate, you can round up your General Admission to $22. Ask a staff member during your next visit. Thank you for your continued support!

The Deering Estate Foundation’s annual signature event, Mistletoe and Martinis, on Friday, December 9, 2022 will celebrate 100 Years of the Stone House – A Century of Preservation and Resilience.

About the Author: Deering Estate