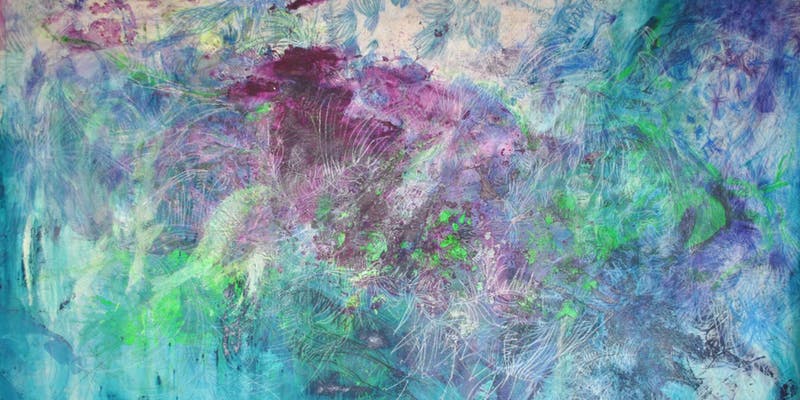 The Deering Estate presents Material Nature, an exhibition of works by artists Alex Nuñez and Julie Davidow on display daily from October 2, 2019 – January 15, 2020.

Material Nature features the work of two Miami-based painters whose works employ the textures, rhythms and patterns found in nature. Immersed in the flora and fauna of South Florida, these paintings reflect the indexical relationships to natural areas that surround them. Emerging from her residency at the Deering Estate, Alex Nuñez’s large scale abstract paintings are a mediation on her research and experience of the site’s natural areas. In Feeding Frenzy, colors and forms appear to vibrate off the canvas like the ripples and swirls she observes in the Deering Estate’s bay vistas. Julie Davidow’s paintings employ a balance of geometric abstraction and biomorphic design. Hard edges meet with sinuous lines and blur the line between material processes and natural processes. The exhibition further connects the legacies of the Deering Estate as a natural preserve and important site for botany and ecology with contemporary art. In addition to the paintings will be archival materials relating to the early explorations of botanist John Kunkel Small during his research trips to the Deering Estate.

Davidow’s work is a search for the gestalt. Her practice includes minimalist abstracted geometric paintings, graphite drawings, wall murals, and site-specific installations which seek to establish order through the mapping of multiple visual cues of microbiological, botanical, geologic, cartographic, and architectural influences reflecting her investigation of the struggle for balance between the natural and built environments. Born in Miami, FL in 1964, Davidow received her BA in Communications from the University of North Florida in 1987. After 10 years as a small business owner she returned to art, attending New World School of the Arts in Miami on scholarship from 1996-1999 with a focus on painting. She is recipient of ARTslant’s 2009 First Prize Golden Frame Award, the Leo & Raye Chestler Contemporary Visual Arts Award, and a Florida Artist Enhancement Award. Her work has been published in the Art Papers, Art Districts, Wallstreet International, The Miami Herald, El Nuevo Herald, South Florida Sun- Sentinel, Miami New Times, Florida Inside/Out, and is featured in New American Paintings Vol. 52 and 76. Her work is included in the permanent collection of the Perez Art Museum Miami, Girl’s Club in Ft Lauderdale, FL; EPIC Miami; and numerous private collections. In addition, Julie is the coauthor of the book MIAMI Contemporary Artists.

Alex Nuñez is a Cuban-American mixed media painter from Miami, FL. She received her BA from Loyola University, New Orleans in 2006 after which she completed international workshops at Firenze Arti Visive, Florence and Metàfora, Barcelona. In 2009 Nuñez received her Post-baccalaureate diploma from School of the Museum of Fine Arts, Boston. In 2012 Nuñez earned her MFA from Hunter College, New York where she was awarded the C12 Emerging Artist Fellowship. Nuñez’s practice concentrates on the amalgamation of pop culture with explosions of color, texture, and sheen. Nuñez’s compositions consist of immersive environments that play on memory, erosion, overindulgence, disorientation, humor, vanity, narcissism, and opulence. Integral to her creative process is music; whether it be through source imagery or visual inspiration by way of audio stimulation. She is the host and producer of the “Sunday Painter” podcast on Jolt Radio, now in the show’s third year of production. Nuñez is currently a resident artist at Fountainhead Studios and the Deering Estate in Miami, FL.

The exhibition evening and artist reception will be held on Wednesday, October 2, 6 p.m. to 9 p.m., free with RSVP at Eventbrite.

Estate Operating Hours:  10AM to 5 PM (no admission after 4PM). Open every day except Christmas Day and Thanksgiving.