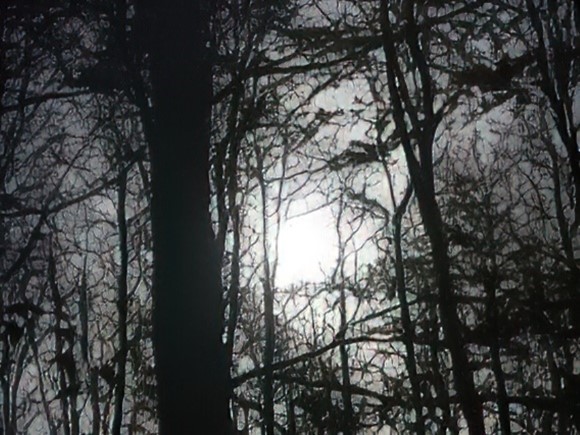 Here, Sherer presents his research in canonical works of personal filmmaking as a public exhibition of vintage film prints. The films are all explorations, interactions, and mediations relating to ecosystems and the natural world. The screening was conceived to engage a general public interested in spectacle and creativity and aid Sherer’s technical practice and development of new works that are site/situation specific to Deering Estate.

Aspect
Emily Richardson | 2004 | 9 minutes | COLOR | CD SOUND 16mm film
Aspect is filmed in a forest over the period of a year. Using photographic techniques, such as time-lapse and long exposures on single film frames the forest year is condensed into a few minutes. Light, color and shadow travel across its surface, and the film shifts between seeing the trees as trees and seeing the movement of light and shadow abstracting the real environment. Your eye is taken all over the screen with this perpetual movement and change of light and color. There is no one focal point – it is continuously changing. As with Redshift and Nocturne, light becomes the main protagonist. In Aspect, fragments of unconscious forest sounds, ants in their anthill, the wind across the forest floor, and the crack of a twig are reconfigured into an audio piece that articulates the film (and the forest) in an illusive and ambiguous way. Produced and Directed by Emily Richardson. Sound: Benedict Drew

Landscape (for Manon)
Peter Hutton | 1987 | 12 minutes | B&W | SILENT 16mm film
First section of an extended study of the weather and landscape in the Hudson River Valley.

Upper Blue Lake
James Otis | 1996 | 12 minutes | COLOR | SILENT 16mm film
“Coming to grips with landscape via pseudo-hyper-stereoscopy. Your eyes are two-and-a-half inches apart, giving viscerally felt depth to 25 feet. If your eyes were 400 feet apart, you’d see solid forms three miles distant and think your grasp extended a mile. I established pairs of viewpoints up to hundreds of feet apart and jogged between, at each shooting a few frames. Since usual depth perception is only to 25 feet, we see anything in stereo as within that distance; mountains are seen as close and, hence, small. Filming took days and days: time, too, is miniaturized; shadows creep and clouds boil. Experience land as diorama and time as summary. UPPER BLUE LAKE, although not the most successfully pseudo-stereoscopic of several such wide-eyed studies, so enthralled me with its various qualities of light and atmosphere, I persevered for five years jogging whenever I could, 12,000 feet high in the Colorado Rockies.”

Elements
Julie Murray | 2008 | 7.5 minutes| COLOR | SOUND 16mm film
This film of a largely un-peopled landscape is an exploration of place visited upon by a few incidental moving figures related to one another by the rhythm of the snowy fog-bound woods, the movement of the moon, and the hesitancy of the clouds.

COST: Free with RSVP via Eventbrite.com. Limited tickets are available and must be RSVP’d online in advance.

Please review the latest safety guidelines prior to visiting the Estate.