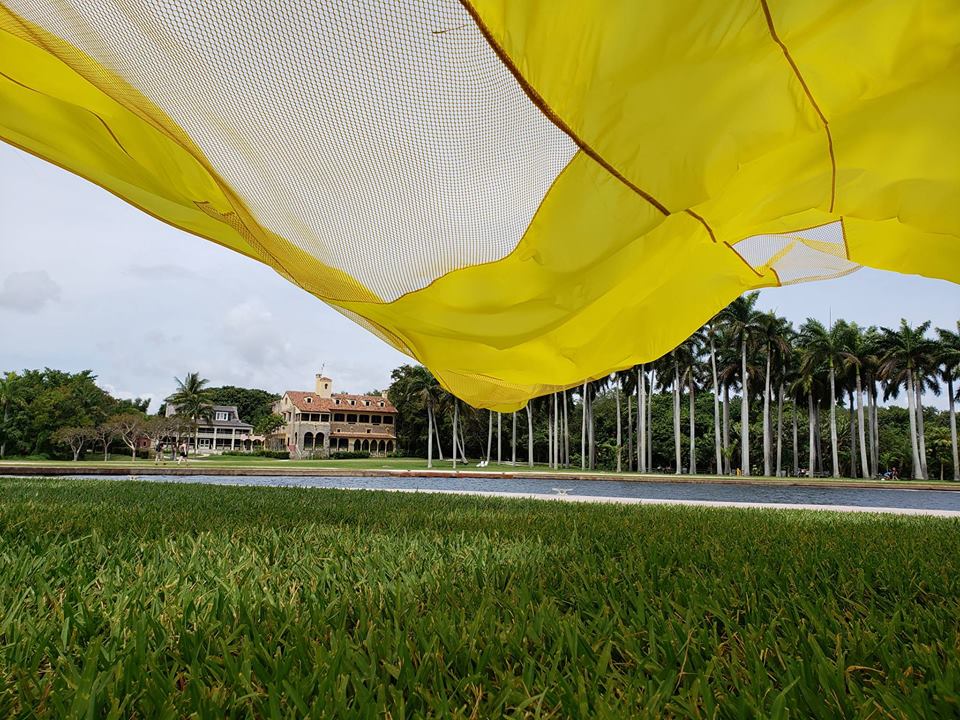 DEERING SPRING CONTEMPORARY 2019:
TENSION IN 3 DIMENSIONS
Guest curated by Artist-In-Residence Ryan Roa, the works in this exhibition are site-specific, composed by artists who manipulate and restrain forces to create tension. Works exhibited around the historic main grounds and in the Stone House Great Hall.

Adam Brent’s work has been exhibited at such notable museums, institutions and galleries as The Islip Art Museum, The Bronx Museum for Contemporary Art, The Aldrich Museum For Contemporary Art, El Museo Del Barrio, Jamaica Flux 2016, The Mattatuck Museum, The New Museum’s Festival of Ideas, Aljira Center for Contemporary Art, Artists Space New Haven, Auxiliary Projects, Apex Art, Margaret Thatcher Projects, Gathering of The Tribes, Wave Hill, BRIC Rotunda, Momenta Gallery, The Bronx River Art Center, The New York Department of Transportation’s Urban Art Program, The New York Public Library, The Center for Book Arts and The 2012 Venice Architecture Biennale. Additionally, he has attended notable residences such as Artists In the Marketplace at the Bronx Museum, Emerge at the Aljira Center for Contemporary Arts in Newark NJ and the DNA artist residency in Provincetown MA. His recent work was solo featured in Volta NY in 2016 and a solo exhibition at Slag Contemporary, Bushwick, NY, in Fall 16. Brent was exhibited in a two person exhibition at Pulse Miami in December 2016 as well. In 2018 and 2019 Brent will have two solo exhibits at Thompson Giroux and Slag Gallery respectively. Brent is a founding member of the BroLab Collective. BroLab had its first major solo exhibition at Freight + Volume Gallery in New York in early 2014 and recently completed a 2-year installation for the Bronx Museum’s Lobby and has exhibited as with an anchor project for Baltimore’s Artscape 2015. Their first book of collaborative work was published in the spring of 2013 by Seton Hall University. Brent has received grants from The Greater New York Arts Development Fund as administered through the Brooklyn Arts Council and the New York Foundation for Contemporary Art and recently received grants from the Elizabeth Firestone Graham Foundation, Newark Arts Council, and the Puffin Foundation. His individual and collective work has received critical attention from the Village Voice, L Magazine, The NY Press, Art Critical, Art and Signature Magazine, The New York Daily News, Architect Magazine, Architizer, Artsy, Art Observed, and the New York Times. Brent also sits on the New York City Department of Transportation’s Art Advisory Committee, is a founding member of Food Design North America, and currently serves as the School Curricular Chair, School of Design Strategies, Parsons School of Design.

The 9th Ecosystem was produced in conjunction with the use of the PAMM App and current exhibition Felice Grodin: Invasive Species—a virtually interactive, digital exhibition of commissioned works by Miami-based artist Felice Grodin that employs the technology of augmented reality.

Influenced by geophilosophy—a field of thought shaped by Gilles Deleuze and Félix Guattari that analyzes the relationship between physical and mental territories—Grodin draws on her training as an architect to explore the mutable within landscape, architecture, and her urban surroundings. By drawing on the destructive impact of invasive species and creating new digital environments, Grodin highlights the transformative and unstable state of our ecosystem, speculating about a not-so-distant future affected by climate change and overtaken by uncanny creatures.

Kerry Phillips creates sculptures and installations using materials, often overlooked, available in a given place at a given time – ranging from things found to collected experiences and retold stories.  Using common materials in uncommon ways she’ll often alter a space using architectural interventions and enlist the public’s participation in the gathering of materials or through performative interactions.

Relying heavily on insight, good oldfangled farm know-how and her MacGyver-like resourcefulness she works with objects subconsciously seeking the inherent values of each. Honoring the memories that they hold—of those who’ve touched it, loved it, passed it down, left it behind, used it, and eventually discarded it—her installations open the door for new memories and for value to be rediscovered. She believes that the value of a thing lies in the stories attached to it, and that in sharing the story one can expand an object’s value to another.

Brookhart Jonquil’s abstract sculptures expand on the discourse of postminimalist art. Using unusual and highly aestheticized construction materials and consumer goods—such as two-by-fours, mirrors, neon lights, and magicians’ flash paper—Jonquil mines the histories of postwar abstract sculpture and scientific imagery. Jonquil’s In a Perfect World I (2013) alludes to subatomic crystalline structures as well as referencing Robert Smithson‘s use of mirrors and the arching metal frames of Frank Stella’s late sculptures. The piece questions the ways in which images, space, and sculptural objects are perceived and experienced. Jonquil’s “Light Objects” series is similarly referential, echoing the work of Keith Sonnier and Richard Serra. “My work is informed by my interest in science, particularly biology, virology, and perception—how our brains are wired to understand the world around us and its social conditions.”

Rigau was born in Little Havana, Miami Florida to a teenager immigrant mother.

His grandparents spoiled him silly to numerous trips to Disney World. Rigau’s uncle brought him to the news station he worked at.  There he learned about media production. In his 3rd year of high school he had his first daughter. My work comes out of all this, and more. Rigau Holds an MFA from Hunter in NY and BFA from F.I.U.

Felecia Chizuko Carlisle performs atmospheric alchemy by making work about space, light, sound and, with this ephemera, the psyche of a place and time. Many of her works feature two phases, atmospheric intervention in the form of sculptural form and lighting, and community activation. She is an artist, educator and organizer. All these roles contribute to her interstitial fine art practice. She works across performance, installation, sound, sculpture, photography, and video within a wide variety of contexts including nightclubs, gardens, bathrooms, empty lots and fire stations; as well as, museums, commercial galleries and non-profit art spaces. Recent exhibitions have been at Elaine L. Jacobs Gallery at Wayne State University (Detroit, MI), Frost Art Museum (Miami, FL), USF Contemporary Art Museum (Tampa, FL), Locust Projects(Miami, FL), Vizcaya Museum and Gardens (Miami, FL), Riverside Art Center(Chicago,IL) and Fountainhead Residency (Miami, FL) and Emerson Dorsch. In 2015, she was awarded a Wavemaker Grant as part of Andy Warhol Foundation Regional Re-granting Program, Foundation for Contemporary Art Emergency Grant, and a commission from Miami-Dade County Art in Public Places. Carlisle received her MFA from San Francisco Art Institute New Genres department in 2006. She is a native Floridian and has lived and worked in Miami, FL since 2009. She is represented by Emerson Dorsch.

The Deering Estate Spring Contemporary is our yearly exhibition and celebration of Miami arts and culture. In response to an annual curatorial theme, our Artists-in-Residence and other local artists interact with the Deering Estate’s unique history through site-specific works. With over a decade of contemporary arts collaborations, this event showcases artworks in the historic homes and throughout the bayside landscape.

Return to Arts Overview
We use cookies to give you the best experience. By using our site, you agree to our cookie policy.Ok